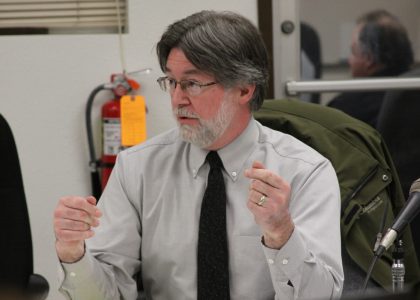 After fourteen years as City Administrator, Greg Young is concluding his service for Ferndale at the end of 2018. Mayor Jon Mutchler has decided not to renew his contract and has tapped Community Development Director Jori Burnett as an interim City Administrator while the City begins the search for a replacement.

“Mr. Young’s service has been exceptional, and he has served the city, including the last three mayors, faithfully and professionally,” said Mutchler. “It is time for a changing of the guard as we move our city forward to the next great chapter of Ferndale’s story.”

Young was hired in 2004 as City Administrator, under Mayor Jerry Landcastle and during his tenure has overseen the construction of a new police station, a new Ferndale library, and the drilling of a new deep well. He helped the city navigate both the Great Recession and the addition of over 5,000 new residents.

“I’m proud of the work I’ve done on behalf of the people of Ferndale,” said Young. “It was an honor and a privilege.”

“Greg and I had already begun the process of preparing Mr. Burnett for the move from planning to administration,” said Mutchler. “I have every confidence in Mr. Burnett’s abilities to manage this transition.”